I was having a coffee and the table next to mine was hosting two people – An old man and a young girl. She appeared to be in early twenties and he was at least 50. Here’s what I did. As soon as I found the conversation intriguing, I put my cell phone on voice recording mode. This was how the conversation went like: 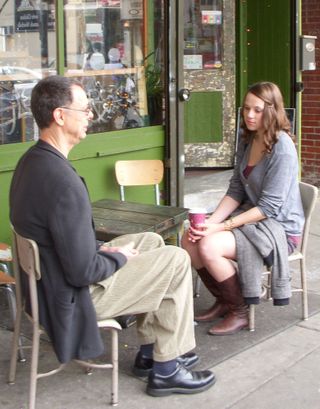 “The last time we met, you looked much happier. Your face doesn’t look that bright today.” He said.

There was some silence.

“I cannot tell how pathetic last week has been for me.” She said in a low voice.

“Nothing. But this time I made it clear. It’s over from my side.”

“Was there any tension earlier?”

“It was fine. There was one instance when he said he wanted to go out with someone. I said – what? So, he was like – it’s ohhhkkk. We have enough time for us. Let’s have fun. Why are you so serious?”

There was a pause before she continued again:

“I still thought he would change and gave him another chance. But dogs don’t change.”

“You are crying sweety.” He held her hand softly.

“No, I am not. I should not.” She comforted herself and made sure she did not get any unnecessary attention in the café.

“It’s a part of life. And these things happen for a reason. To help us understand that world is not always a happy place. You do meet bad people on the way. That’s all right. But you’ve got to make sure one thing, that you do not repeat the same mistake again.”

“I guess. I have to be really stupid to do that.” She tried to smile, for the first time in the whole conversation. This made him laugh too.

“Can I tell you something?” He said.

“I really love you sweety.”

“I love you too Dad.” She replied.

They left. But there was something about this conversation that moved me. I wish every father could understand his daughter the way he did, and every child could share his/her problems with their parents the way she did. The world would be a happier place to live.

One thought on “Coffee Conversation”