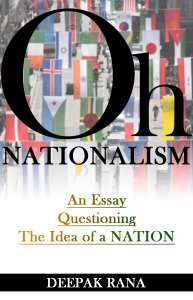 It was a sweltering afternoon, when I stood next to the gigantic gates of Wagah Border – an enthralling place which separates the two nations: India and Pakistan. My watch, already soused with sweat, displayed 3 pm, which meant I was still two hours away from the glorious Wagah Border Ceremony and was supposed to stand in a queue. I was not alone, rather surrounded by an overwhelming crowd – immersed in the songs of patriotism, waiting for their chance to enter the much revered place.

As it is customary in India – the queue is not expected to stand still or behave in a manner that could even remotely be called ‘civilised’ – and thus, the entropy reigned supreme. Soon, the combination of heat and lack of civic sense led people to enter each other’s territory and eventually, more and more people began to push each other as the clock ticked close to five.

When the gates were finally opened, everyone ran, clamouring the chants of “Bharat Mata ki Jai” – Long Live Mother India; not caring about the person standing next to them and for a brief moment, for some reason, it did not seem right. I was running too; I had to, because if I did not, it was almost certain I would have got run over by the crowd, despite all their noble intentions. At that precise moment, I noticed an old man losing his balance and falling on the road; the patriots continued to run at their own pace, unwilling to stop, in order to help the old man. I slowed my pace and tried to reach out to him, and while I had been kicked many times during that short distance of a few meters, it was evident that he had suffered more blows; and therefore, I was not surprised to see him not wanting to attend the event anymore. He left, quietly.

When the ceremony commenced at the border, everyone joined the celebrations. Bharat Mata ki Jai (Long Live Mother India) – the songs were flying in the air, trying to rejuvenate the atmosphere that was saddened by the absence of that old man. My emotions remained inexpressible – the same people who were mercilessly crushing their fellow citizens a while ago, were singing patriotic songs now – I contemplated. We are proud Indians, we love India – they sang.

Did they understand – What is India? I don’t know, but I know one thing for sure – they did not understand humanity.

Note: Above excerpt is taken from Oh Nationalism: An Essay Questioning the Idea of a Nation. The complete essay can be found here: Oh Nationalism!