It is quite rare when you tell the people about the growth and development of their city and they refuse to believe it. This is the story of Gurgaon, where the city has grown tremendously, without informing the state or its residents. Gurucharan Das in his book “India Grows at Night” has rightly presented the case of India growing with its efficient private sector, despite its poor governance, and Gurgaon remains the prime witness to it. Let’s try to examine why Gurgaon’s story has been a special one:

If you go to the posh areas of Gurgaon, you will find high rise buildings, well maintained, and covered by hi tech security. This is the result of private players doing a wonderful job. The security guards have been hired in thousands, are doing well. Same goes about the other staff members in such apartments. On the other hand, if you go to the suburbs of Gurgaon, where people are not rich enough to buy security personnel for themselves, thefts and other crimes occur frequently.  The infrastructure that comes under govt sector if compared with DLF buildings, would bring shame to the governance. Gurgaon is a poorly planned city, no wonder the work being done by Haryana Urban Development Authority. But in between you can find some beautiful buildings designed by DLF. Clearly, the state has failed, private players have not. 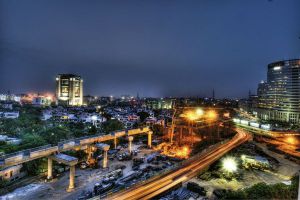 In the last decade, when the land prices in Gurgaon suddenly shot up to sky heights, people turned Rich or Super Rich within no time. Most of them never had that much money before. And they were not well educated either. This started a new era. Where the power was in the hands of the rich and no one cared about the poor. This again was the result of poor governance. Had government been more powerful and effective, rich men with guns in their hands, wouldn’t be able to run around the city. The power which should be in the hands of wise, is associated with money in Gurgaon.

It is clear from the above two paragraphs that the administration and police have been good for nothing. They are there to do the formalities and not making any difference in the lives of people. Again coming to the comparison of private societies and the suburbs, one can see how awful latter is. Gurgaon is well known for the car thefts and police if not directly then indirectly is responsible for it. Being a part of Delhi NCR, Gurgaon remains hell when it comes to girls’ safety issues. If you are a girl, then the moment you come out of M.G. Road metro station, you will find dozens of eyes scanning you from top to bottom. The police administration is in a pathetic state. If you have witnessed a crime, better not to go to the police if you don’t want any mental harassment.

One of the important lessons to be learnt from the Gurgaon story is that money cannot contribute to a good education. Most of the people in Gurgaon send their kids to the private schools. Even the poor these days are sending their children to the small private schools. Clearly the faith in the government run schools has disappeared. But the quality of education provided in most of them remains a matter of concern. If crime and immoral acts are engraved on a city’s reputation, it cannot be proud of its education. That tells us that education cannot be bought. It is something that evolves partly in the educational institutes and partly in a society. Also the state’s interference in necessary if we want to provide quality education to those who cannot afford it.

Gurgaon story gives us a fair idea that a city or state cannot grow without a proper governance. The private players have undoubtedly outperform the government sector, but the city remains undeveloped in many areas. Private colonies will take care of their own areas. The moment you step out of that area, you find the garbage dumps everywhere. Private security personnel may have done a fair job but they cannot assure the safety of a girl going to watch a movie at night. Education is not only about studying in a well paid institute but also about the sense about how to treat others. If Gurgaon, and same goes about India, has to grow in real sense, it will have to have a strong governance and powerful private sector. The two if work together will mark the true modernization.

One thought on “Why Gurgaon is Special !!”