It was a miserable morning for Eklavya when the JEE results flashed on the website and he was prompted to check them without any delay. He could not believe his eyes when he saw an embarrassingly low score, which was not sufficient to make it to any IIT. The dream had shattered! The tears started to pour down like the monsoon rains and they seemed to wash every hope along the way. It was his last JEE chance and he knew he had missed out on a critical opportunity. There was no one else to console him, which made it even worse, and he kept cursing himself with all the filthy words he had learnt in school. The tears took a long time to dry up. But he had realized that he had to get up and become an engineer all by himself. He took a deep breath, closed his eyes and thought for a while. There had to be a solution and he had to find it. He did not fail this time.

He ordered a porcelain statue of his idol – Viru Sahastrabudhe (Director IIT Bombay), from e-bay (which happened to be their first order of the year) and it was delivered in a matter of a few days. Virus – as it was clearly written on the sticker, Eklavya preferred to call it “Virus Guru”. The nude statue was placed in his bedroom so that he could meet his hero in the dreams – the dreams that also witnessed the might of lord Indra. Once Eklavya thought about putting a piece of cloth on the statue but he changed his mind for some conspicuous reasons. He prayed to the statue every day and every night. And even though the original Viru Sahastrabudhe had completely ignored the emails that he had sent to request for admission in IIT Bombay, he still preferred to worship his own Virus and learn engineering from the statue. 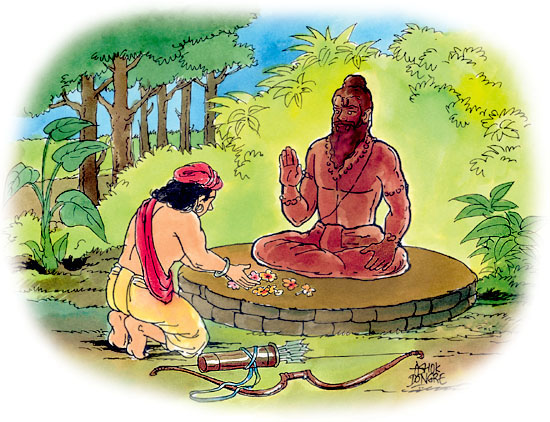 After a while, IIT Bombay started its distance learning course and Eklavya was the first and the only person to get enrolled in it. He downloaded all the course material, including the high quality videos of Viru Sahastrabudhe and he studied all of them, sitting beside the statue. The statue proved itself as good (or as bad) as the real Viru. It was of no help, except the fact that it served as a good seat where Eklavya rested his butts. Eklavya was a mechanical engineering student, which meant it was not unacceptable. The statue did not respond when Eklavya asked questions and he had to learn all by himself, which he did in the end. But his most important achievement came at the end of the next year, when he cleared the CAT exam and made it to IIM Ahmedabad. By that time, Eklavya had fallen in love with the statue and wanted to marry it.

When he walked in to IIM Ahmedabad, he introduced himself and told everything about how he made it to the institute. His words were – “It was the unconditional love of Mr. Virus’s statue and the touch of its soft and lustrous body that helped kicked my ass.”

News spread, Twitter flooded with #VirusMissingPenIsFound and the story ultimately reached Virus’s ears. He called Eklavya to his place.

“So, you are the one who…” Virus could not even complete his sentence.

“You are even more beautiful than the statue…” Eklavya exclaimed.

“What are you saying?” he sounded angry.

“I am serious. Your charm is mesmerising. I could never imagine the intellectual genius wrapped in an alluring body.”

“You are making me blush.”

“I want to make you blush.”

“And what would that be?”

“But that would make me not-a-man-anymore.”

“Guru Dakshina forbids saying no to any request.”

After that day, Eklavya didn’t remain the same man. In fact he didn’t remain a man. Interestingly, Virus’s son-in-law Rancho suddenly became a man. It is Eklavya’s pen that he is holding – kids from Ladakh’s school occasionally tease Rancho whenever he goes to pee.